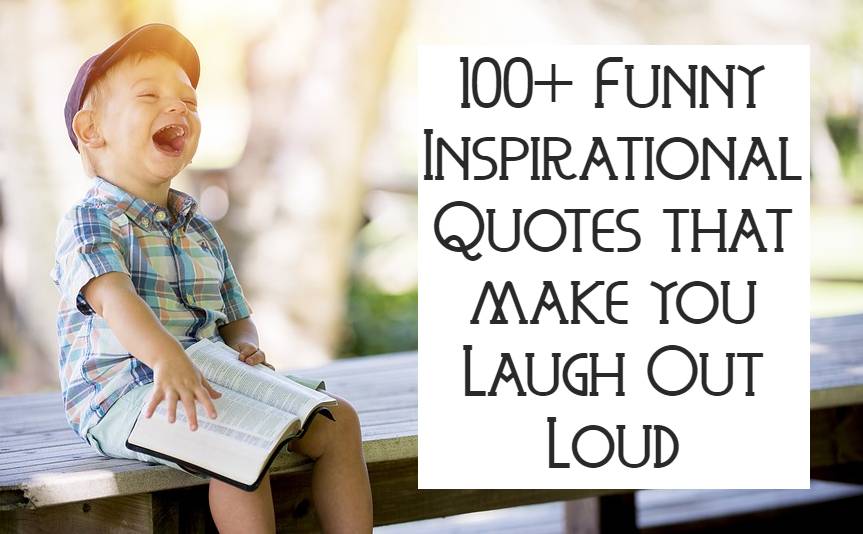 Everybody knows that Laughter is the best medicine in life, Funny Inspirational Quotes and sayings one of the best ways to make a smile on your face.

So, in This Article, we are sharing Best Inspirational Funny life Quotes, Hope you like and enjoy these quotes collection.

“If you think you are too small to make a difference, try sleeping with a mosquito.” – Dalai Lama

“It would be nice to spend billions on schools and roads, but right now that money is desperately needed for political ads.” – Andy Borowitz

“Better to remain silent and be thought a fool than to speak out and remove all doubt.” – Abraham Lincoln

“The average dog is a nicer person than the average person.” – Andy Rooney

“You can’t wait for inspiration. You have to go after it with a club.” Jack London

“At every party there are two kinds of people – those who want to go home and those who don’t. The trouble is, they are usually married to each other.” – Ann Landers

“If I were two-faced, would I be wearing this one?” – Abraham Lincoln

“If you want your children to listen, try talking softly to someone else.” – Ann Landers

“Wisdom comes from experience. Experience is often a result of lack of wisdom.” – Terry Pratchett

“Doctors are just the same as lawyers; the only difference is that lawyers merely rob you, whereas doctors rob you and kill you too.” – Anton Chekhov

“If you’re going to be thinking, you may as well think big.”- Donald Trump

“The best thing about the future is that it comes one day at a time.” – Abraham Lincoln

“My opinions may have changed, but not the fact that I’m right.” – Ashleigh Brilliant

“There are no traffic jams along the extra mile.” – Roger Staubach

“The elevator to success is out of order. You’ll have to use the stairs… one step at a time.” – Joe Girard

“The only mystery in life is why the kamikaze pilots wore helmets.” – Al McGuire

“Even if you are on the right track, you’ll get run over if you just sit there.”- Will Rogers

“I find television very educating. Every time somebody turns on the set, I go into the other room and read a book.”- Groucho Marx

“Change is not a four letter word… but often your reaction to it is!”- Jeffrey Gitomer

“A smile is a curve that sets everything straight.”- Phyllis Diller

“Light travels faster than sound. This is why some people appear bright until you hear them speak.” – Alan Dundes

“Opportunity does not knock, it presents itself when you beat down the door.”- Kyle Chandler

“Friendship is like peeing on yourself: everyone can see it, but only you get the warm feeling that it brings.” – Robert Bloch

“The brain is a wonderful organ; it starts working the moment you get up in the morning, and does not stop until you get into the office.” – Robert Frost

“The best way to cheer yourself up is to try to cheer somebody else up.” – Mark Twain

“If you think you are too small to be effective, you have never been in the dark with a mosquito.” – Betty Reese

“Money won’t buy happiness, but it will pay the salaries of a large research staff to study the problem.” – Bill Vaughan

“To be sure of hitting the target, shoot first, and call whatever you hit the target.” – Ashleigh Brilliant

“The surest sign that intelligent life exists elsewhere in the universe is that it has never tried to contact us.” – Bill Watterson

“You can’t wait for inspiration. You have to go after it with a club.” – Jack London

“Life is like a sewer – what you get out of it depends on what you put into it.” – Tom Lehrer

“The key to success is not through achievement but through enthusiasm.” – Malcolm Forbes

“You have brains in your head. You have feet in your shoes. You can steer yourself any direction you choose. You’re on your own. And you know what you know. And YOU are the one who’ll decide where to go.” – Dr. Seuss

“Trouble knocked at the door, but, hearing laughter, hurried away.” – Benjamin Franklin

“Never let your sense of morals prevent you from doing what is right.” – Isaac Asimov

“Never put off until tomorrow what you can do the day after tomorrow.” – Mark Twain

“Age is of no importance unless you’re a cheese.” – Billie Burke

“Before you judge a man, walk a mile in his shoes. After that who cares?… He’s a mile away and you’ve got his shoes!”
– Billy Connolly

“Wine is constant proof that God loves us and loves to see us happy.”
– Benjamin Franklin

“I’ve always wanted to go to Switzerland to see what the army does with those wee red knives.”
– Billy Connolly

“Have you noticed that all the people in favor of birth control are already born?”
– Benny Hill

“Going to church doesn’t make you a Christian any more than going to a garage makes you an automobile.”
– Billy Sunday

“Always borrow money from a pessimist. He won’t expect it back.” – Oscar Wilde

“Failure is the condiment that gives success its flavor.” – Truman Capote

“The difference between genius and stupidity is; genius has its limits.” – Albert Einstein

“Nobody realizes that some people expend tremendous energy merely to be normal.”
– Albert Camus

“The difference between stupidity and genius is that genius has its limits.”
– Albert Einstein

“History will be kind to me for I intend to write it.”- Winston S. Churchill

“People often say that motivation doesn’t last. Well, neither does bathing; that’s why we recommend it daily.” – Zig Ziglar

“If you’re going to tell people the truth, be funny or they’ll kill you.” – Billy Wilder

“The world is full of magical things patiently waiting for our wits to grow sharper.” – Bertrand Russell

“Be who you are and say what you feel, because those who mind don’t matter and those who matter don’t mind.” – Bernard Baruch

“People say nothing is impossible, but I do nothing every day.” – A.A. Milne

“All the things I really like to do are either immoral, illegal or fattening.” – Alexander Woollcott

“Most people would sooner die than think; in fact, they do so.” – Bertrand Russell

“Opportunity is missed by most people because it is dressed in overalls and looks like work.”- Thomas Eddison

“I was never really insane except upon occasions when my heart was touched.”- Edgar Allan Poe

“Facebook just sounds like a drag, in my day seeing pictures of peoples vacations was considered a punishment.” – Betty White

“A bank is a place that will lend you money if you can prove that you don’t need it.” – Bob Hope

“I find television very educational. Every time someone turns it on, I go in the other room and read a book.” – Groucho Marx

“Sometimes when I’m talking, my words can’t keep up with my thoughts. I wonder why we think faster than we speak. Probably so we can think twice.” – Bill Watterson

“Everything that used to be a sin is now a disease.” – Bill Maher

“If you don’t know where you are going, you might wind up someplace else.” – Yogi Berra

“If there is anything the nonconformist hates worse than a conformist, it’s another nonconformist who doesn’t conform to the prevailing standard of nonconformity.” – Bill Vaughan

“All you need in this life is ignorance and confidence, and then success is sure.” – Mark Twain

“The only thing standing between you and your goal is the bull**** story you keep telling yourself as to why you can’t achieve it.” – Jordan Belfort

“There never was a child so lovely but his mother was glad to get him asleep.” – Ralph Waldo Emerson

“Life is like a sewer… what you get out of it depends on what you put into it.” – Tom Lehrer

“Think left and think right and think low and think high. Oh, the thinks you can think up if only you try!” – Dr. Seuss

“I didn’t fail the test. I just found 100 ways to do it wrong.”- Benjamin Franklin

“Too much of a good thing can be wonderful.” – Mae West

“Opportunity does not knock, it presents itself when you beat down the door.” – Kyle Chandler

“If a cluttered desk is a sign of a cluttered mind, of what, then, is an empty desk a sign?”- Albert Einstein

“Don’t worry about the world coming to an end today. It is already tomorrow in Australia.” – Charles Schulz

“Sometimes you wake up. Sometimes the fall kills you. And sometimes, when you fall, you fly.”- Neil Gaiman

“It took me fifteen years to discover I had no talent for writing, but I couldn’t give it up because by then I was too famous.” – Robert Benchley

“It is not the answer that enlightens, but the question.” – Eugene Ionesco Decouvertes

“Have you ever noticed how ‘What the hell’ is always the right decision to make?”
Terry Johnson

“Life is a shipwreck but we must not forget tossing in the lifeboats.” – Voltaire

“I never travel without my diary. One should always have something sensational to read on the train.”
Oscar Wilde

“When I hear somebody sigh, Life is hard, I am always tempted to ask, ‘Compared to what?’” – Sydney Harris

50+ Long Distance Relationship Quotes Her and Him of All Time