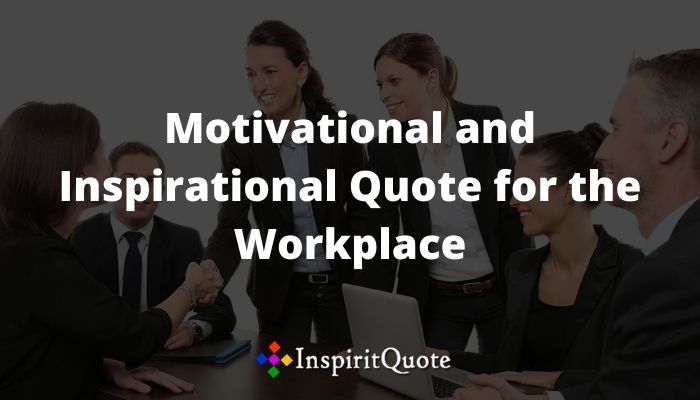 Hi In This Article we are sharing Motivational and Inspirational Quote for the Workplace That Will Inspire Your Employees. You Can Send These Quotes with your Employee, Friends and others.

Inspirational Quote for the Workplace 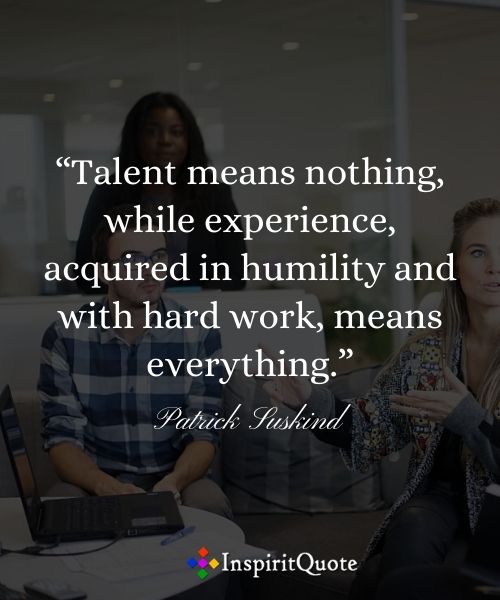 “Concentrate all your thoughts upon the work in hand. The sun’s rays do not burn until brought to a focus. “ – Alexander Graham Bell

“Talent means nothing, while experience, acquired in humility and with hard work, means everything.” – Patrick Suskind

“Either you run the day or the day runs you.” – Jim Rohn

“I’m a greater believer in luck, and I find the harder I work the more I have of it.”-Thomas Jefferson

“When we strive to become better than we are, everything around us becomes better too.” -Paulo Coelho

“Opportunity is missed by most people because it is dressed in overalls and looks like work.” -Thomas Edison 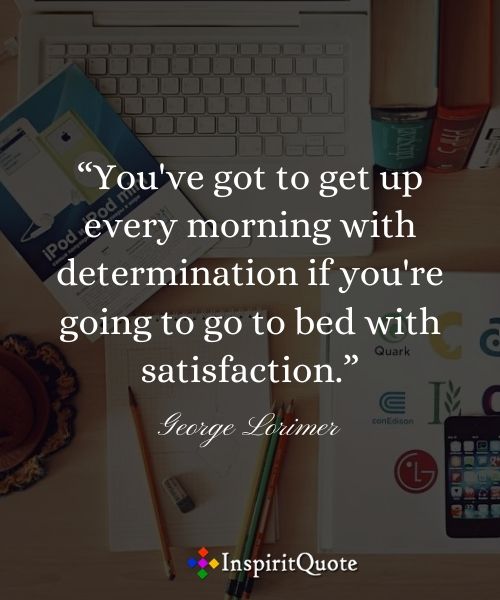 “You’ve got to get up every morning with determination if you’re going to go to bed with satisfaction.” -George Lorimer

“Don’t judge each day by the harvest you reap but by the seeds that you plant.” -Robert Louis Stevenson

“Just one small positive thought in the morning can change your whole day.” -Dalai Lama

“One of the best pieces of advice I ever got was from a horse master. He told me to go slow to go fast. I think that applies to everything in life. We live as though there aren’t enough hours in the day but if we do each thing calmly and carefully we will get it done quicker and with much less stress.” -Viggo Mortensen

“Don’t wish it were easier. Wish you were better.” -Jim Rohn

“Do the hard jobs first. The easy jobs will take care of themselves.” -Dale Carnegie 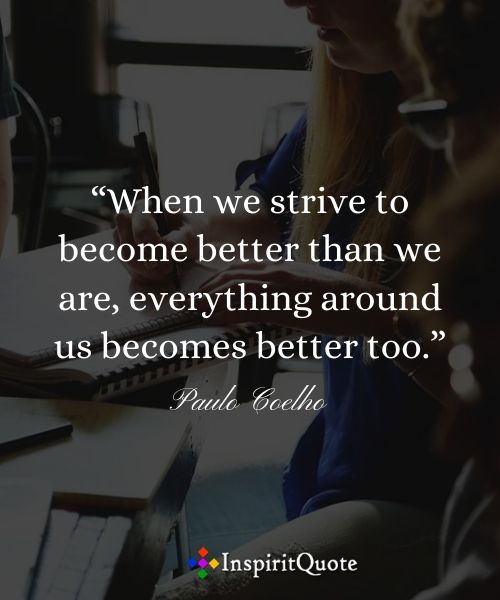 “You will never plough a field if you only turn it over in your mind.”- Irish Proverb

“Success seems to be connected with action. Successful people keep moving. They make mistakes, but they don’t quit.” -Conrad Hilton

“Dreams can come true, but there is a secret. They’re realized through the magic of persistence, determination, commitment, passion, practice, focus and hard work. They happen a step at a time, manifested over years, not weeks.” -Elbert Hubbard

”This is the real secret of life — to be completely engaged with what you are doing in the here and now. And instead of calling it work, realize it is play.” -Alan Wilson Watts

“Developing a good work ethic is key. Apply yourself at whatever you do, whether you’re a janitor or taking your first summer job because that work ethic will be reflected in everything you do in life.” -Tyler Perry

“Motivation is a fire from within. If someone else tries to light that fire under you, chances are it will burn very briefly.” -Stephen R. Covey 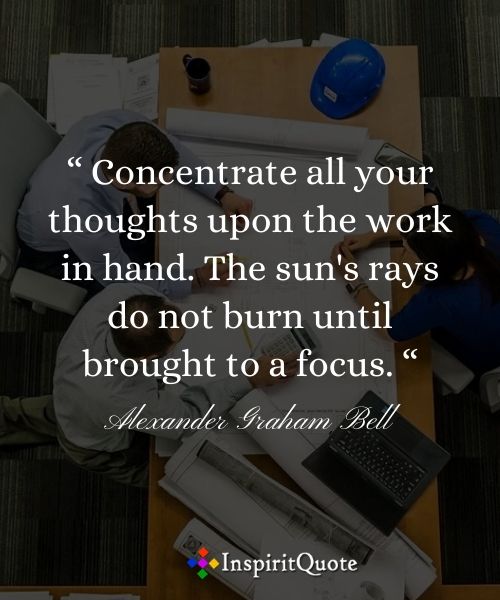 “Happiness is not in the mere possession of money; it lies in the joy of achievement, in the thrill of creative effort.” -Franklin D. Roosevelt

“Success means doing the best we can with what we have. Success is the doing, not the getting; in the trying, not the triumph. Success is a personal standard, reaching for the highest that is in us, becoming all that we can be.” -Zig Ziglar

“The future depends on what you do today.” -Mahatma Gandhi

“The man who moves a mountain begins by carrying away small stones.” -Confucius

Don’t Miss: Famous 50+ Quotes About Finding Yourself That You Must Read one Time

“Do more than is required. What is the distance between someone who achieves their goals consistently and those who spend their lives and careers merely following? The extra mile.” -Gary Ryan Blair

“Things may come to those who wait, but only the things left by those who hustle.” -Abraham Lincoln

“Start by doing what’s necessary, then what’s possible; and suddenly you are doing the impossible.” -Saint Francis

“People rarely succeed unless they have fun in what they are doing.” -Dale Carnegie

“To think too long about doing a thing often becomes its undoing.” -Eva Young 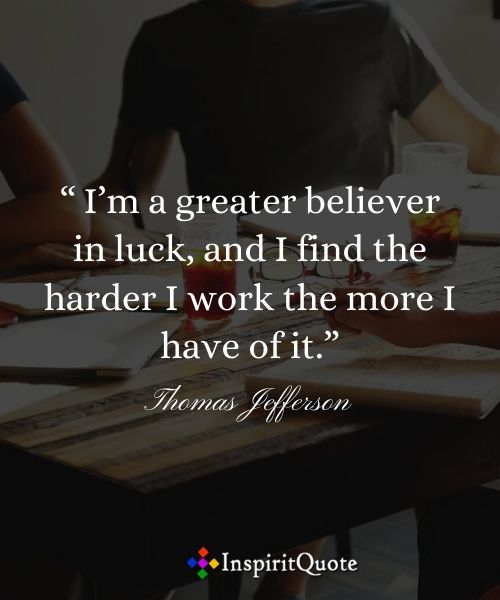 “I have always believed, and I still believe, that whatever good or bad fortune may come our way we can always give it meaning and transform it into something of value.” -Hermann Hesse

“When we long for life without difficulties, remind us that oaks grow strong in contrary winds and diamonds are made under pressure.” -Peter Marshall

“It ain’t as bad as you think. It will look better in the morning.” -Colin Powell

“The best way out is always through.” -Robert Frost

“There are two primary choices in life: to accept conditions as they exist, or accept the responsibility for changing them.” -Denis Waitley

“As long as they are well-intentioned, mistakes are not a matter for shame, but for learning.” -Margaret Heffernan

Motivational Quote for the Workplace 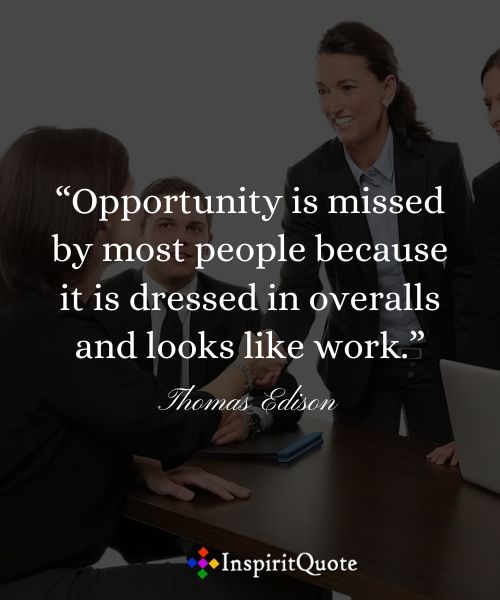 “You are never too old to set another goal or to dream a new dream.” -C.S. Lewis

“One of the symptoms of an approaching nervous breakdown is the belief that one’s work is terribly important.” -Bertrand Russell

“When one door of happiness closes, another opens, but often we look so long at the closed door that we do not see the one that has been opened for us.” -Helen Keller

“I’ve learned that no matter what happens, or how bad it seems today, life does go on, and it will be better tomorrow.” -Maya Angelou

“The only thing that overcomes hard luck is hard work.” -Harry Golden

“If you are working on something exciting that you really care about, you don’t have to be pushed. The vision pulls you.” —Steve Jobs

“Just don’t give up trying to do what you really want to do. Where there is love and inspiration, I don’t think you can go wrong.” —Ella Fitzgerald

“Never allow a person to tell you no, who doesn’t have the power to say yes.” —Eleanor Roosevelt

“My attitude is that if you push me towards something that you think is a weakness, then I will turn that perceived weakness into a strength.” —Michael Jordan

“Oh yes, the past can hurt. But you can either run from it, or learn from it.” —Rafiki, The Lion King

“If I had nine hours to chop down a tree, I’d spend the first six sharpening my axe.” —Abraham Lincoln

“The mind is its own place, and in itself can make a heaven of hell, a hell of heaven.” —John Milton, Paradise Lost

“Intelligence is the ability to adapt to change.” —Stephen Hawking

“Leaders can let you fail and yet not let you be a failure.” —Stanley McChrystal

“It’s hard to beat a person who never gives up.” – Babe Ruth

“I’m a greater believer in luck, and I find the harder I work the more I have of it.” – Thomas Jefferson

“I have learned that real angels don’t have gossamer white robes and Cherubic skin, they have calloused hands and smell of the days’ sweat.” – Richard Evans

“Greatness is sifted through the grind, therefore don’t despise the hard work now for surely it will be worth it in the end.” – Sanjo Jendayi
“A dream doesn’t become reality through magic; it takes sweat, determination and hard work.” – Colin Powell

“My grandfather once told me that there were two kinds of people: those who do the work and those who take the credit. He told me to try to be in the first group; there was much less competition.” – Indira Gandhi

“Happiness is the real sense of fulfillment that comes from hard work.” – Joseph Barbara

“Hard work keeps the wrinkles out of the mind and spirit.” – Helena Rubinstein

“No great achiever – even those who made it seem easy – ever succeeded without hard work.” – Jonathan Sacks

“The highest reward for man’s toil is not what he gets for it, but what he becomes by it.” – John Ruskin

“You learn the value of hard work by working hard.” – Unknown

“Nobody’s a natural. You work hard to get good and then work to get better. It’s hard to stay on top.” – Paul Coffey

“Don’t wish it were easier. Wish you were better.” – Jim Rohn

“All growth depends upon activity. There is no development physically or intellectually without effort, and effort means work.” – Calvin Coolidge

“Talent means nothing, while experience, acquired in humility and with hard work, means everything.” – Patrick Suskind

“The difference between ordinary and extraordinary is that little extra.” – Jimmy Johnson

“If I told you I’ve worked hard to get where I’m at, I’d be lying, because I have no idea where I am right now.” – Jarod Kintz

“Too many irons, not enough fire.” – S. Kelley Harrell

“Patience can be bitter but her fruit is always sweet.” – Habeeb Akande

“If you try and lose then it isn’t your fault. But if you don’t try and we lose, then it’s all your fault.” – Orson Scott Card

“Embrace the pain to inherit the gain.” – Habeeb Akande

“Talent is what God gives us, Skill is what we give back to Him.” – Eliel Pierre

“The only thing that overcomes hard luck is hard work.” – Harry Golden

“I hope the millions of people I’ve touched have the optimism and desire to share their goals and hard work and persevere with a positive attitude.” – Michael Jordan

“Goodness and hard work are rewarded with respect.” – Luther Campbell