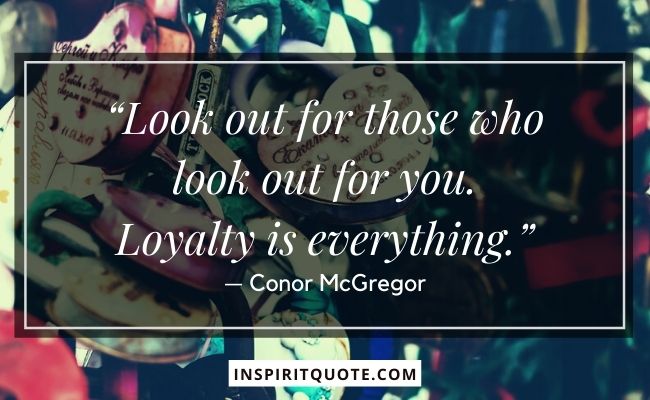 Loyalty quotes – The merits of loyalty are often debated – anyone who has ever been hurt by someone they considered a true friend can attest to the fact that loyalty is a double-edged sword.

But no one who has ever found himself/herself in need of a true friend can deny it is one of the most valuable gifts in the world.

But as valuable it is, it can also be exceedingly rare.

Perhaps one of the reasons that it is such as rare quality these days, is that loyalty is so easy to misplaced.

onlyto realize that your trust has been betrayed and your faith has been broken ?

But without loyalty, families are broken and friendships are empty.

These loyalty quotes come from authors, politicians, business person’s and others who have thought long and hard about the merits and consequences of loyalty.

These quotes about loyalty encompass loyalty between spouses and friends, as well as the commitments made within military forces and companies, and nations.

Also Read: Life Is Too Short to Be Anything but Happy Quotes

“Loyalty is the strongest glue which makes a relationship last for a life time.” – Mario Puzo

“My first language, the true language of the soul spoken only on our planet of origin, had no word for betrayal or traitor. Or even loyalty- because without the opposite, the concept had no meaning.” – Stephanie Meyer

“You have to be really loyal to the people that supported you when you were coming up.” – Sylvester Stallone

“A true friendship is one in which everything can be told, and nothing will be judged.” – Unknown

“Honesty and loyalty are key. If two people can be honest with each other about everything, that’s probably the biggest key to success.” – Taylor Lautner

“Friendship with oneself is all-important, because without it one cannot be friends with anyone else.” – Eleanor Roosevelt

“Never befriend the oppressed unless you are prepared to take on the oppressor.” – Ogden Nash

“When I meet a new person, I am on the lookout for signs of what he or she is loyal to. It is a preliminary clue to the sense of belonging, and hence of his or her humanity.” – Haniel Long

“…it isn’t things and proximity, or even blood that holds us all together. What makes a family is love and loyalty.” – Genevieve Dewey

“I look for these qualities and characteristics in people. Honesty is number one, respect, and absolutely the third would have to be loyalty.” – Summer Altice

“A person who deserves my loyalty receives it.” — Joyce Maynard

“Better to have one woman on your side than ten men.” – Robert Jordan

“Loyalty is what we seek in friendship.” — Marcus Tullius Cicero

“Look out for those who look out for you. Loyalty is everything.” — Conor McGregor

“You’d be surprised how rare loyalty is, sometimes.” – Zoe Sugg

“If put to the pinch, an ounce of loyalty is worth a pound of cleverness.” – Elbert Hubbard

“Never be a slave of loyalty to unloyal people.” – Shannon Alder

“Loyalty is from above, betrayal is from below.” – Bob Sorge

“Loyalty is everything, but everything isn’t loyal.” – Terrance McAllister

“Where the battle rages, there the loyalty of the soldier is proved.” – Martin Luther

“Loyal companions are an unequaled grace, stanching fear before it bleeds you numb, a reliable antidote for creeping despair.” – Dean Koontz

“I belong to the people I love, and they belong to me- they, and the love and loyaty I give them, form my identity far more than any word or group ever could.” – Veronica Roth

Also Read: 50 Best Soulmate Quotes for Him and True Love

“Love is friendship that has caught fire. It is quiet understanding, mutual confidence, sharing and forgiving. It is loyalty through good and bad times. It settles for less than perfection and makes allowances for human weaknesses.” – Ann Landers

“Unlike the puerile loyalty to a conviction, loyalty to a friend is a virtue – perhaps the only virtue, the last remaining one.”– Milan Kundera

“Loyalty to an unjust cause is a perversion of honor.” – Brian Herbert & Kevin J. Anderson

“Loyalty is a continuous phenomenon, you don’t score points for past action.” – Natasha Pulley

“The highest compact we can make with our fellow is – “Let there be truth between us two for evermore.” – Ralph Waldo Emerson

“An onion shared with a friend tastes like roast lamb.” – Egyptian Proverb

“A boy can learn a lot from a dog: obedience, loyalty, and the importance of turning around three times before lying down.” – Robert Benchley

“The final test of a leader is that he leaves behind him in other men the conviction and will to carry on.” – Walter Lippmann

“I look for these qualities and characteristics in people. Honesty is number one, respect, and absolutely the third would have to be loyalty.” – Summer Altice

“Never esteem anything as of advantage to you that will make you break your word or lose your self-respect.” – Marcus Aurelius

“We have no money. We have no possessions. Maybe that is why we value the things we do have… loyalty and friendship.” – Anthony Horowiz

“It isn’t an easy thing to give your loyalty to someone you don’t know, especially when that person chooses to reveal nothing of himself.” – Megan Whaler Turner

“Loyalty is something you give regardless of what you get back, and in giving loyalty, you’re getting more loyalty; and out of loyalty flow other great qualities.” – Charles Jones

“I have a loyalty that runs in my bloodstream, when I lock into someone or something, you can’t get me away from it because I commit that thoroughly. That’s in friendship, that’s a deal, that’s a commitment. Don’t give me paper – I can get the same lawyer who drew it up to break it. But if you shake my hand, that’s for life..” – Jerry Lewis

“Anyone can give you attention and compliments… but someone who loves you will give you that plus respect, honesty, trust, and loyalty.” – Charles Orlando

“A friend is someone who walks into a room when everyone else is walking out.” – Gary Moore

“Loyalty means nothing unless it has at its heart the absolute principle of self-sacrifice.” – Woodrow Wilson

“Together we shared a bond not even death would violate.” – Dee Remy

“Loyalty means sticking with people you love through hard times. It doesn’t mean giving someone a license to treat you like nothing and you’ll stick around no matter what. Big difference.” – Doe Zantamata

“A person is born with feelings of envy and hate. If he gives way to them, they will lead him to violence and crime, and any sense of loyalty and good faith will be abandoned.” – Xun Zi

“If you cant value a commitment made by someone else, your own commitments lose their value too.” –Ram Mohan

“The first step in the evolution of ethics is a sense of solidarity with other human beings.” – Albert Schweitzer

“Women’s loyalty has to be earned with trust and affection, rather than barbaric rituals. The time has come to leave the old ways of suffering behind.” — Waris Dirie

“Sometimes it was worth all the disadvantages of marriage just to have that: one friend in an indifferent world.” – Erica Jong

“I think a good friend, to me, is all about trust and loyalty. You don’t ever want to second-guess whether you can tell your friend something.” – Lauren Conrad

“I place an enormous premium on loyalty. If someone betrays me, I can forgive them rationally, but emotionally I have found it impossible to do so.” – Richard E. Grant

“You cannot buy loyalty; you cannot buy the devotion of hearts, minds, and souls. You have to earn these things.” – Clarence Francis

“Trust is earned, respect is given, and loyalty is demonstrated. Betrayal of any one of those is to lose all three.” — Ziad K. Abdelnour

“It is not fair to ask of others what you are not willing to do yourself.” — Eleanor Roosevelt

We hope you Like these Quote of Loyalty, You Can share these Quotes with Your Friends on Social Media.

100 Inspirational and Motivational Business Quotes for 2020

Life Is Too Short to Be Anything but Happy Quotes