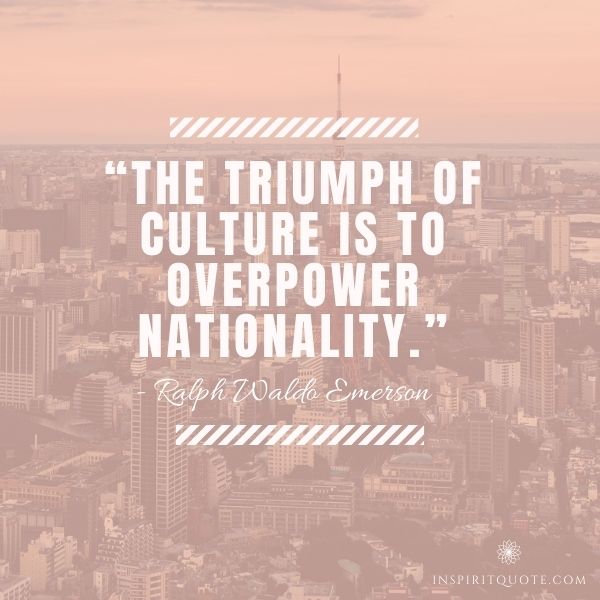 You Can Read Popular Quotes About Culture – Quotations & Sayings Given in Below.

“Culture is the name for what people are interested in, their thoughts, their models, the books they read and the speeches they hear” -Walter Lippmann.

“Culture is the arts elevated to a set of beliefs” – Thomas Wolfe.

“Strength lies in differences, not in similarities” – Stephen R. Covey.

“One of the greatest regrets in life is being what others would want you to be, rather than being yourself” – Shannon L. Alder.

“The crucial differences which distinguish human societies and human beings are not biological. They are cultural.” – Ruth Benedict.

“You don’t have to burn books to destroy a culture. Just get people to stop reading them.” – Ray Bradbury.

“Culture is a way of coping with the world by defining it in detail.” – Malcolm Bradbury.

In an immature society culture is an import; for a mature one it is a native manufacture which eventually becomes an export.”– Northrop Frye

“It is not part of a true culture to tame tigers, any more than it is to make sheep ferocious.” – Henry David Thoreau

“A people without the knowledge of their past history, origin and culture is like a tree without roots.” – Marcus Garvey

“A nation’s culture resides in the hearts and in the soul of its people” – Mahatma Gandhi.

“Every man’s ability may be strengthened or increased by culture” – John Abbot.

“If we are to preserve culture we must continue to create it” – Johan Huizinga.

“Culture is the name for what people are interested in, their thoughts, their models, the books they read and the speeches they hear.” – Walter Lipmann

“Culture is not made up but something that evolves which is human.” – Edward T. Hall

“The triumph of culture is to overpower nationality.” – Ralph Waldo Emerson

“Our cultural diversity has most certainly shaped our national character.” – Julie Bishop

“No culture can live if it attempts to be exclusive.” – Mahatma Gandhi

“Culture is the widening of the mind and of the spirit.” – Jawaharlal Nehru

“Culture is a way of coping with the world by defining it in detail.” – Malcolm Bradbury

“To merely observe your culture without contributing to it seems very close to existing as a ghost.” – Chuck Palahniuk

“That is true culture which helps us to work for the social betterment of all.” – Henry Ward Beecher

“No people come into possession of a culture without having paid a heavy price for it.” – James Baldwin

“No occupation is so delightful to me as the culture of the earth, and no culture comparable to that of the garden.” – Thomas Jefferson

“Preservation of one’s own culture does not require contempt or disrespect for other cultures.” – Cesar Chavez

“Piety is not a goal but a means to attain through the purest peace of mind the highest culture.” – Johann Wolfgang von Goethe

“It’s part of our pop culture to give animals human personalities and talents.” – Neil Degrasse Tyson

“Popular culture is a contradiction in terms. If it’s popular, it’s not culture.” – Vivienne Westwood

“All I’ve ever wanted to do is move the needle on popular culture.” – Jimmy Iovine

“People constantly make pop-culture references. That’s why it’s called popular culture, because people are aware of it and reference it constantly.” – Seth Rogen

“Popular culture has become engorged, broadening and thickening until it’s the only culture anyone notices.” – P.J. O’Rourke

“We once turned to popular culture because it produced fantasy objects; now, we are asked to ‘identify with’ the fantasizing subject itself.” – Mark Fisher

“Whatever you say about popular culture, people like people who know things, who are experts, and it doesn’t particularly matter what they look like.” – Mary Beard

Never Force Anyone To Talk To You Quotes To Note Down

Best Quotes About Success For Us

Funny Quotes For Everyone

Best Smile Quotes Of All Time