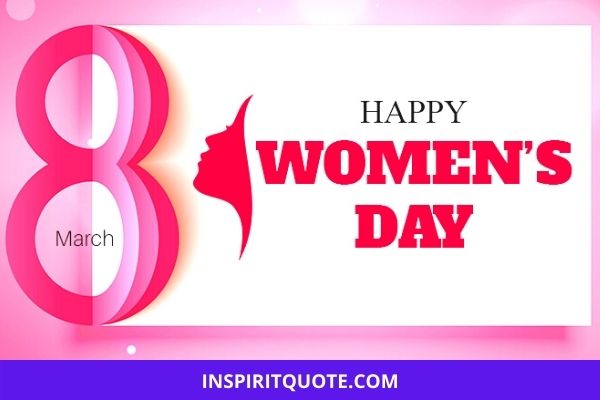 “There is nothing stronger than a broken woman who has rebuilt herself.” – Hannah Gadsby

“A charming woman doesn’t follow the crowd; she is herself.” –Loretta Young

“Life is tough, my darling, but so are you.” -Stephanie Bennett-Henry

“Women are the real architects of society.” – Cher

“Mother’s are the miracles of life.” ― Lailah Gifty Akita

“A strong woman looks a challenge in the eye and gives it a wink.” –Gina Carey

“Women are the largest untapped reservoir of talent in the world.” –Hillary Clinton

“The most important thing one woman can do for another is expand her sense of actual possibilities.” – Adrienne Rich

“We realize the importance of our voice when we are silenced.” – Malala Yousafzai

“Sometimes it’s the princess who kills the dragon and saves the prince.” –Samuel Lowe

“If you have knowledge, let others light their candles in it.” –Margaret Fuller

“You should never let your fears prevent you from doing what you know is right.”- Aung San Suu Kyi

“Where there is a woman, there is magic.” – Ntozake Shange

“I am grateful to be a woman. I must have done something great in another life.” – Maya Angelou

“As soon as I had enough agency in my life to grow up, I became who I am.” – Janet Mock

“I have learned over the years that when one’s mind is made up, this diminishes fears; knowing what must be done does away with fear.” – Rosa Parks

“There is no force more powerful than a woman determined to rise.” –W.E.B. Dubois

“No one can make you feel inferior without your consent.” -Eleanor Roosevelt

“There is no limit to what we, as women, can accomplish.” – Michelle Obama

“Think like a queen. A queen is not afraid to fail. Failure is another stepping-stone to greatness.” -Oprah

“There is no limit to what we, as women, can accomplish.” –Michelle Obama

“The most courageous act is to think for yourself. Aloud.” -Coco Chanel

“She’s everything; even when she’s treated like nothing.” –R.H. Sin

“We need to reshape our own perception of how we view ourselves. We have to step up as women and take the lead.” -Beyoncé

“I expect woman will be the last thing civilized by man.” –George Meredith

“No woman should be told she can’t make decisions about her own body. When women’s rights are under attack, we fight back.” -Kamala Harris

“A woman with a voice is, by definition, a strong woman.” – Melinda Gates

“No one can make you feel inferior without your consent.” –Eleanor Roosevelt

“We need to live in a culture that values and respects and looks up to and idolizes women as much as men.” – Emma Watson

“The age of a woman doesn’t mean a thing. The best tunes are played on the oldest fiddles.” –Ralph Waldo Emerson

“I’m tough, I’m ambitious, and I know exactly what I want. If that makes me a bitch, okay.” –Madonna

“There’s something so special about a woman who dominates in a man’s world. It takes a certain grace, strength, intelligence, fearlessness and the nerve to never take no for an answer.” – Rihanna

“There’s nothing a man can do that I can’t do better and in heels.” –Ginger Rogers

“A charming woman doesn’t follow the crowd. She is herself.” – Loretta Young

“I do not wish women to have power over men; but over themselves.” – Mary Shelley

“A woman is like a tea bag: You can’t tell how strong she is until you put her in hot water.” –Eleanor Roosevelt

“Every woman’s success should be an inspiration to another. We’re strongest when we cheer each other on.” – Serena Williams

20+ Famous Quotes About Luck and Hard Work who inspired You